On June 29 of last month, the iPhone celebrated its 5th birthday. Did that sentence just fill you with nostalgic flashbacks of using the GPS-enabled Maps app for the first time (pure magic) or playing Angry Birds? Well, it shouldn’t. The original iPhone didn’t even have GPS capability and Angry Birds wasn’t released until a couple years later. In fact, the App Store itself didn’t exist until a year after the device’s inception. So you’ll have to reach a little further back. In the meantime, here are a few specs of the 5-year-old model that may jog your memory.

Color: It was the only model to feature a silver metal backing (shown below). 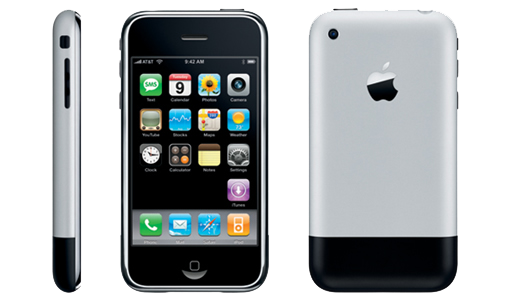 Novel features: The iPhone made keyboards obsolete, featuring just one physical button and a touch screen that directed all user commands. Concepts such as swiping, double tapping, and pinch-and-zoom multitouch were all established by the iPhone. The iPod feature made listening to music easier than ever, and the Safari browser made mobile browsing just about as easy as using a desktop.

Since launching the iPhone, Apple has generated cumulative revenues of $150 billion and shipped 250 million devices globally. Realistically, there’s no way for Apple to maintain this kind of trajectory, but we’re hoping that the challenge to do so will spring even greater technology into our pockets. Here’s a video of Steve Jobs (RIP) introducing the iPhone at the MacWorld Conference & Expo in 2007.