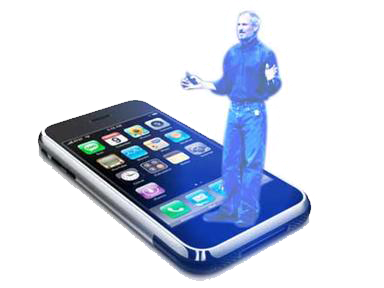 Apple is set to make George Lucas’ work look prosaic. The Star Wars auteur was one of the first to depict holograms 35 years ago. Now, Apple is bringing his visionary foresight to the visual forefront…

Hordes of fake videos depicting holographic capabilities for the new iPhone and iPad have been storming the Internet as of late. While people have been quick to attest to either the legitimacy or illegitimacy of said videos, the key word that points to the latter being accurate is “concept.” Yes, Apple was granted a patent involving a 3D display and imaging system, but there is no way of telling when this technology will be made available for our fingertips. Patently Apple explains:

Apple’s patent covers a wild 3D system that could generate an invisible space in front of the user that could allow them to work with holographic images or project their hands onto a screen in front of them to manipulate switches or move pieces of virtual paper or parts of a presentation. One could only image how this could be applied to 3D gaming, business or medical applications in the future.

One of the first rumored concepts from Apple is that of a laser keyboard, which can be  seen below:

Another incredibly awesome and even more incredibly fake video illustrates holographic potential for the iPad. We have to admit that this would be pretty sweet:

So when can we expect to see have Star Wars technology at our disposal? Only time will tell. The fact that Apple can’t even tell us when the new iPhone is going to be released is a testament to the futility of such a guessing game. So wait, we will.