Home News Banishing an Ancient Curse from Detroit with a Parade, Costumes, and a Lot of Red 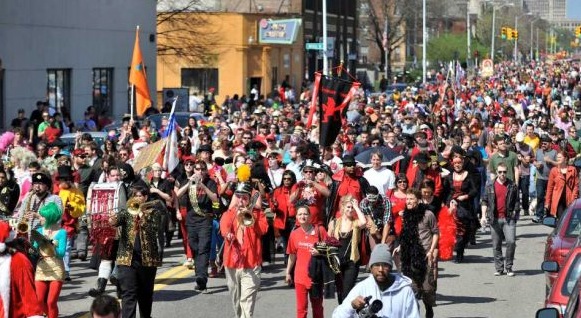 Are you looking for something to do that involves Detroit’s history, a parade, and silliness?  If you are, we have the event for you. On March 23rd from 1:00pm to 3:00pm in Cass Corridor neighborhood of Detroit is The Marche du Nain Rouge!  This annual event seeks to cast out the evil red devil that haunts Detroit.

The legend of the Nain Rouge (French for red dwarf) starts with the arrival of French settlers to the banks of a river, to a land that would come to be known as Detroit.  The first sighting of the fiendish red dwarf of Detroit was by the founder of Detroit himself, Antoine de la Mothe, sieur de Cadillac. After the sighting, it is told that, he lost his fortune.  Since that time, Nain Rouge has been the harbinger of ill fortune for the city of Detroit.  Legend has it that Nain Rouge is responsible for historic tragedies such as bloody battles, the great fire of 1805 (which destroyed the entire city), and the 12th Street Riot of 1967.

In 2010 a group of residents took it upon themselves to find Nain Rouge and chase him out of the city.  Ever since then, the residence of Detroit has joined together every March to parade through the city dressed in costumes and chase the red devil away and celebrate the coming of spring.  More information can be found on the official Marche du Nain Rouge website or Facebook page.  This is an all-ages free event that is open to the public. The only requirement is that everyone dresses up in costumes or masks.  The parade starts in the parking lot of Traffic Jam & Snug (511 West Canfield Street) and culminates in Cass Park. There is also a 5k Run Du Nain Rouge happening earlier in the day that is open to the public. There are also several bars and restaurants that have their own events after the parade.

So, if you are looking for something to do on March 23rd that involves history, costumes, and community involvement… the Marche du Nain Rouge is the event for you.

The Importance of Updating your Website In the intangible world of the internet, your website acts as a handshake for your customers. Just as…

In the last several years there has been quite a lot of buzz about Detroit’s growing art scene.  Artists are increasingly creating street art, innovative…