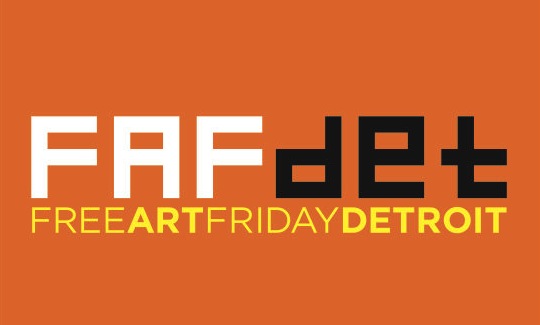 In the last several years there has been quite a lot of buzz about Detroit’s growing art scene.  Artists are increasingly creating street art, innovative interactive art events, and exploring the intricacies of Detroit culture and society. One great example of the interesting things happening there in Detroit is the weekly event called Free Art Fridays. This is an interactive event that anyone can become involved in.  Think of it as an artsy scavenger hunt.  Every Friday, artists hide a work of art somewhere in the city like an Easter egg. They then post picture clues on the FAF Facebook or Twitter pages for anyone to find the art and take it home with them to enjoy.

The origin of Detroit’s Free Art Fridays is a little hazy but it is credited as being started by a U.K. artist called ‘My Dog Sighs’. The Free Art movement was well underway by the time of the creation of the official FAF Flickr group in 2006, but this further expanded the exposure of the movement.  From then on the Free Art movement has used this weekly event as a tool to expand the cause and gain interest from the general public.  Since then, FAF has expanded across the globe to include participating cities in Europe, Israel, and Australia.

Free Art Friday is particularly popular because it is completely inclusive. Anyone can create a work of art and contribute. Any type of art can be made; sculpture, painting, fiber art, etc. The art can be placed anywhere in the city (as long as it does not damage the environment it is placed in). And anyone is free to find the art and take it home with them to enjoy.

Detroit’s Free Art Fridays have been going on in Detroit for years, and it is still going on strong. Get involved by going to their Facebook or Twitter page. Surprise yourself by creating your own work of art to share. Or go on an adventure in the city to find yourself a new original artwork for your home!

Banishing an Ancient Curse Are you looking for something to do that involves Detroit’s history, a parade, and silliness?  If you are, we have…