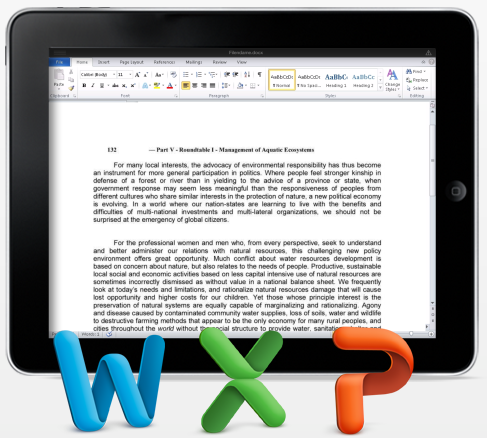 Let’s just get it out there – we don’t like Microsoft. We’ve always been and will always be Mac people. But we have to (begrudgingly) admit that Microsoft Office is our word processor of choice, as it is for most of the computing world. So we were undoubtedly geeked to hear that there’s a strong possibility it will be making its way to the iPad later this year.

The Daily has reported that its sources have indicated that Microsoft will launch Office for the iPad on November 10.

“We’ve learned that the development team within Office Mobile finished its work on the project last month, and the effort of the design group wrapped soon after,” The Daily reported.

We like the iPad. It’s fun, handy, intuitive. But its lack of a solid word processor has limited it to an entertainment device in many ways. We’ve always believed that the addition of a native Microsoft Office app would transform it into a legitimate business tool. We know our clients, like us, would benefit greatly from the ability to create professional word documents on the go.

All of this must be taken with a grain of salt, however. Microsoft has remained understandably coy on the matter, accusing sources of inaccurate rumors and speculation. Proponents of the Apple iWorks app (Pages, Numbers, and Keywords) claim that Microsoft Office wouldn’t be worth the price tag, but we know better. As long as most of the world is running on Microsoft Office formats, it’s probably best that you follow suit.

While there’s the possibility of this being nothing more than hearsay, we’ll remain curious and update our blog with any new information we acquire. This is great news for now, but you can’t trust everything you read on the Internet. Outside of our blog, that is.

Photography For This Year’s (Business) Model